Good day minister Zulu. First congratulations on your appointment on the new department.

This article has been in the writing even before it became known that the Department of Small Business Development would be. I’ve been chasing perfection with it, but I guess like entrepreneurship is about operating in ever ideal-less situations – it will never be perfect.

I hope there are many entrepreneurship activists like myself who are publicly raising their suggestions for SMME growth in South African, to the department. I believe more ideas, especially from different people give depth to solutions.

Below I list a few things which I believe frustrate entrepreneurship growth and acceleration, in South Africa. I have also included some ideas on how entrepreneurship can be fast tracked to strengthen and enlarge South African owned economic activity – which in the popular sense is economic prosperity for all.

And in no way am I implying solutions vest majorly on government.

As South Africa’s GDP is the largest in Africa (actually now it is second to Nigeria), but with more unemployment than some countries with a lesser GDP and more people, who then is enjoying a bigger chunk of the GDP?

Through analyzing our exports versus imports, we can tell that foreign investors are enjoying our GDP through mostly: consumables (phones, clothing, cosmetic, soft products) and other innovations.

If the import gap (through work of course) is lessened a bit to the favour of local goods, this is simple better life most South Africans.

More focus needed on products’ based businesses over administrative ones

The growth of a country’s banks depends on the growth in the amount of monies they handle. For more money to be handled, the GDP has to grow. Or a case of more people, who didn’t have money before, now does. Or they managed to attract internationals to bank with them.

A banking industry’s growth is dependent on the productivity of a country.

They can, by giving more loans to startups that can definitely become successful. ‘Definitely’ cannot be pre-determined. So it remains just a huge risk which is very unlikely to be taken, unless someone secures the loans – like government often does.

The point I am making is, a financial bank’s role is administrative in the economy (unless it is a development bank which most often finances mortgaged and very particular industries like farming).

So, more distinctive focus is needed on businesses which will grow the GDP directly, versus those whose growth is a consequence of the GDP’s growth.

Not the internet cafe, but locals manufacturing computers which:

This could be consumables products like: software, clothing, electronics etc.

I accept and understand why banks fund projects with some sort of security (letter of intent to do business, collateral and other forms) and with proven concepts (Proven concept means someone must have successfully done it before).

But for something to be truly innovative, it has to lead, meaning it has to be an unproven concept, which wouldn’t fall within the conventional funding ambits.

Government can Fastrack the situation.

And this isn’t easy money to get, though it seems so but it is not. South African society (family and friends) isn’t so supportive (literally, finance wise) when it comes to entrepreneurial venturing, even worse on unconventional businesses.

Since already government is funding large capital-needing projects, many which have failed, it is fair for a chunk of that to be risked on “disruptive startups” which are in multiples, but need much less funding.

Without making an argument of why funding decisions for disruptive businesses shouldn’t be made by civil servants, the chief winning argument is the best people for the job is experienced entrepreneurs who have had the unfortunate, but natural course of failures and successes.

The suggestion is to have a panel of experienced entrepreneurs to review applications for funding by disruptive startups, who need small amounts of funding, R3000 to R100 000.

Technical example: It could be a panel of 100 persons, a group of 3 individuals given a certain number of funding applications.

There are a lot of such entrepreneurs who would be willing to come on-board on voluntary basis.

The missing link between SMME and local manufacturers to grow local brands.

If you pick up the phone to call one of the big clothing manufacturers in the country, and say you need 50 units of t-shirts. What will follow next is ‘sorry we only do big orders’ and the phone being hung up.

Which is ok, it is their business model. They concentrate on big retailers.

However, the nature of big retailers is they are quick to change their minds to go to Mauritius, China, Turkey or wherever abroad in an instant – when the price is right, because they can afford to.

For example, a fashion startup wants to manufacture in South Africa because, although per item prices of those 50 units could be cheaper elsewhere abroad, courier costs make it expensive. So they are forced to settle for CMT’s here, which in my experience in clothing, such clothes fall behind in quality as compared to the likes of Woolworths.

The other big question is how to up-skill CMT’s to produce best quality!!

When big clothing retailers switch to foreign countries for production, it hurts big local manufacturers hard as they (retailers) constitute a large percentage (30% plus) of their clientele.

The gap in the whole situation is no new fashion startups are rising to be the next big retailers. Because: they are less competitive in that they cannot make same quality clothes as the big guys.

The way to close this gap is by finding a way for South African manufacturers to produce small units of, e.g. 50, for startups. It could be incentive based or however. But it is critical that it be done.

If it happens, it is an advantage firstly to the startups, and for the big manufacturers. They would be grooming the next big retailer or fashion house.

When this process compounds, gradually South African manufacturing will operate at optimum levels.

A machine which was in use for 3 hours a day, as result of improved business, can now be used for 6 hours. This machine will produce more than it used to, against fixed costs (warehouse rental, security). And other variable costs (labour, electricity, maintenance etc.), whose rise produces better profits.

When startups can produce their small orders with quality manufacturers who also produce for established retailers, they would be accelerated to a point where the competition would be more about appeal, because quality is the same.

This point applies perfectly to the clothing industry, but also applies to other consumables industries.

Funding is a challenge everywhere in the developing world, including South Africa.

But there have been many young entrepreneurs who have made success of their businesses even without funding, but by bootstrapping and using a lean approach.

Marketing is essentially getting the attention of your product’s possible customers; each in their different areas, directly or indirectly (virtual), with whatever medium suitable to each; sales pitching to them that your product meets their appeal and want and that they should consider yours over the competition.

Then with the proceeds from the sales, intensifying or scaling up your reach to more and more customers – and repeat business of course.

If sales do not happen, startups have to interview customers, review their product constitution and marketing and tweak until product is acceptable and appealing to customers by means of sales.

A lot of startups, including myself struggle with this.

The solution here on broader level is intensifying platforms that accelerate marketing and scaling skills.

Lets us take All Star Converse as an example. It is an American brand. It is loved everywhere else in the world, especially here in South Africa. In the past it used to be associated with ma-pantsula, but now it appeals to a lot different sub-cultures. Actually it cuts across sub-cultures. For some people, they just have to have it.

When a South African buys All Star, it is because it intrigues them in one way or another. Whether it’s that it looks good on them or that it is in trend or it is their signature.

When an American buys it, either one or all of these reasons apply. The nationality of the brand could to an extent bear weight (I think it’s extremely little), but I am sure it is not a determining factor – it is just a bonus: the shoe’s intrigue, look and appeal outweigh the brand’s geographical roots. Hence Americans can love many other European brands.

I remember H20’s 2003 (am I right?) ‘Wonderful’ video. It featured a whole lot of South African celebrities wearing Loxion Kulca. We immediately loved the brand either because of its appeal, design, meaning (especially for a resurging SA), intrigue and the famous stylish people who wore it. Zandi Nhlapo, neh. The ‘proudly local’ factor came last, if it came – it was just a bonus.

It is not bankable to rely heavily on ‘buy local’. The call here could be to not only rally support for local products but to extremely gunner skilling platforms for brandpreneurs to attract business from locals and beyond – with minimum spend on marketing.

In light of that multi millions have been spent on ‘buy local’ lobbying campaigns which have, yes, produced some success – but not sustainable or anticipated success: it is a good option to risk part of the millions on skills – even if sometimes it means sourcing abroad. In the long run, hustle and creative skills are better than access to market lobbying.

Just quickly, I have observed a number of government technology initiatives mandated to incubate entrepreneurship ideas in this field. And often you would hear of the great ideas or prototypes the entrepreneurs have there; that’s it.

It seems they take forever to get to market – which again is expensive. The sooner a product gets to market, the better its misconceptions are rooted out by the market so that new informed directions can be taken; or even pivoting.

Watch out (sign up) for his upcoming book ‘The Anxious Entrepreneur’

Entrepreneur and founder of STARTUP PICNIC. Author of The Anxious Entrepreneur, Forget The business Plan Use This Short Model and Township Biz Fastrack. 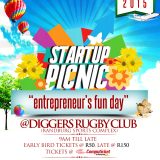 Good day minister Zulu. First congratulations on your appointment on the new department. This article has been in the writing even before it became known that the Department of Small Business Development would be. I’ve been chasing perfection with it, but I guess like entrepreneurship is about operating in ever ideal-less situations – it will…